Despite industry and government promises of reform…

Sheep decapitated whilst still alive; calves slipping and collapsing repeatedly to the floor for three hours; goats leaping into the killing area to try to evade the stunning tongs… These are among the scenes secretly filmed by Animal Aid at F Drury & Sons slaughterhouse in Wiltshire.

Animal Aid’s secret filming at F Drury & Sons, which kills sheep, goats, calves and adult cows, also shows evidence of breaches of the Welfare of Animals (Slaughter or Killing) regulations. The law states that, after their throats are cut, no further procedure may be carried out on sheep for at least 20 seconds. This is because the animal is likely to still be alive. But at F Drury & Sons, sheep routinely had their necks dislocated and their heads cut off immediately after their throats were cut.

This same practice was uncovered at the Soil Association-approved slaughterhouse Tom Lang Ltd in Devon, as a consequence of which three men were investigated with a view to a prosecution. Those cases were dropped in September.

The law also states: ‘No person shall cause any avoidable excitement, pain or suffering to any animal’ and yet Animal Aid’s filming at Drury’s found that it was common practice to take animals from the lairage and leave them in the stun pen for up to three hours. Two calves, unable to stay upright on the slippery floor, slipped to the ground, their legs splayed, over and over as workers walked by and ignored their plight.

The stunning of the goats made the most shocking viewing. The terrified animals did all they could to escape the electric tongs, bleating and trying to leap through the hatch and into the slaughter area. Such fear is, unsurprisingly, commonplace among animals in slaughterhouses and cannot be ameliorated through legislation.

‘After revealing widespread lawbreaking and cruelty to animals in six of the seven slaughterhouses we first filmed, one might hope that the industry and regulators would have got their house in order. And yet, here we are, 15-months on, and there is no discernible improvement. Neck dislocation and decapitation immediately after throat cutting are clear breaches of the law. Did the government-appointed vet and the slaughterhouse management just turn a blind eye to this?

‘The industry and regulators are failing animals. And since Defra decided not to prosecute using Animal Aid’s footage, it gives a virtual green light for any illegalities and abuses to take place. The industry cannot be trusted to operate within the law and the government-appointed vets can’t be relied upon to make them do so. The only way to end such suffering is to stop eating meat.’ 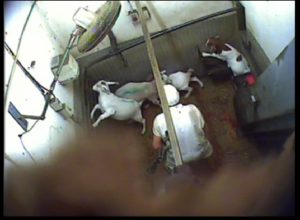