Tate Modern has recently installed a piece by Hélio Oiticica, entitled Tropicália, which features two macaws in a small cage. 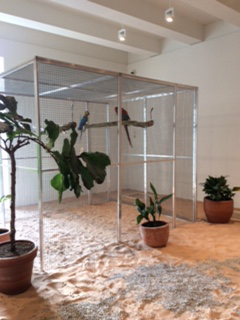 The cage does not allow them to fly the distances they naturally would, and shows very little enrichment. After an email was sent to Tate Modern by Animal Aid, we have learnt that the birds have been taken back to their ‘owner’ until the gallery is not ‘as busy’. However, hundreds of people visit Tate Modern every day – such numbers result in loud noises and can cause the animals stress.

Macaws are highly intelligent and sensitive birds and they should not be forced into cages and reduced to an art exhibit.

Write to the Tate Modern now!