Unseen by most people, animals who live in the countryside are often persecuted, labelled as pests or predators, and killed just because they wish to live, eat and reproduce.

Many archaic and cruel devices are used to trap wildlife. Snares are used to catch animals such as foxes. Different types of cage traps are employed to lure corvids – such as crows and magpies – into the cages from which they cannot escape. Their fate is then sealed and they will be ‘dispatched’ (typically by being bludgeoned to death).

Videos and photos of our most recent investigation are below. 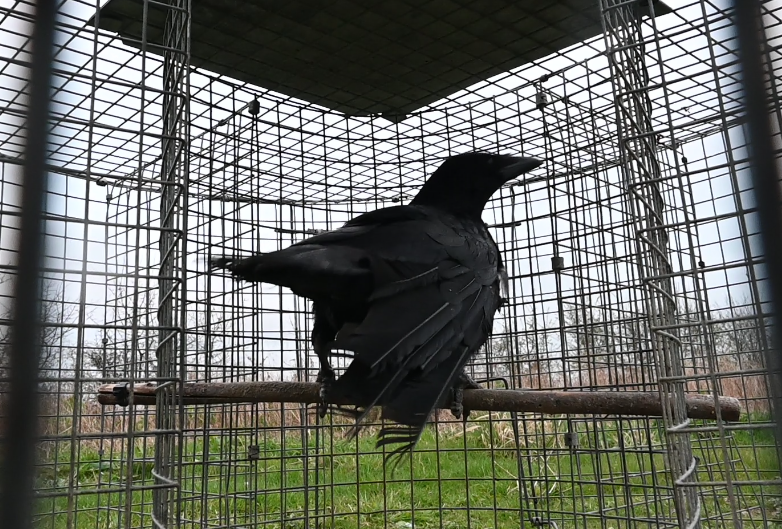 Many traps make use of a live ‘decoy’ bird, who is confined in a tiny separate compartment, to lure other birds of his species into the main enclosure.

Animal Aid has exposed the suffering of these birds over the years. In the most recent example, an investigator uncovered an injured bird being held in such a trap. He appeared to have considerable damage to his right wing. On returning to the trap four days later, the same bird (with a damaged right wing) was still in the trap. The Animal Welfare Act 2006 requires that decoy birds are protected ‘from pain, suffering, injury and disease.’

On both occasions, there was no food in the food bowl in the trap (though it is unclear whether this would have been filled during the day), and on the second occasion the water in the bowl had frozen. Regulations surrounding the use of such traps, stipulate that the water should be ‘kept ice free during daylight hours – if this is not possible, the conditions are not suitable and you must not use a decoy bird’

An often-used excuse for the use of such traps is to ‘protect’ game birds and their eggs. These eggs will hatch and become the game birds who will be shot for ‘sport’ . The use of cage-traps is essentially killing some birds to protect other birds who are to be shot.

We reported this latest incident to the local wildlife police, who have investigated the matter.

Further videos can be viewed here and here